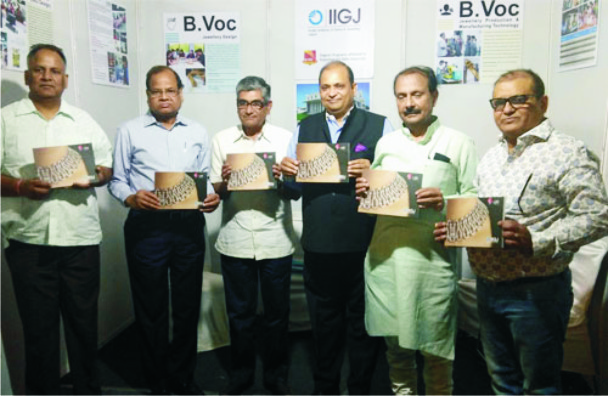 The Indian Institute of Gems & Jewellery, Jaipur (IIGJJ), a project of The Gem &Jewellery Export Promotion Council (GJEPC) released their annual publication on May 27, 2018. The publication, more in the nature of a prospectus,covers an entire range of information from the history and activities of the institute, to details regarding the latest courses offered.

This year, the commencement of the new batch will mark an important milestone for the IIGJJ – for the first time it will be offering degree courses in affiliation with the Rajasthan ILD Skill University (RISU), starting from July 2018.

For the degree programmes, the IIGJJ is offering six new courses in its forthcoming term – four at the Master’s level and two at the Bachelor’s level.

Present on the occasion of the release of the prospectus, were some leading lights of the industry including Chairman of the GJEPC, Pramod Agrawal; Honorary Secretary, IIGJJ, Sudhir Kasliwal; Rajiv Arora, Director, IIGJJ; Dr. Nawal Agarwal, Director, IIGJJ; VijayKedia Director, IIGJJ. The event was also attended by several eminent trade personalities and Prof. Dhiraj Kumar IIGJJ Principal, along with IIGJJ staff and students.

GJEPC Chairman Pramod Agrawal congratulated the entire team of the institute and shared his vision with all the industry leaders. He said the affiliation of IIGJJ with RISUmarks the beginning of a new era for the institute taking it to a new level in the international realm of gems and jewellery education

Sudhir Kasliwal, Honorary Secretary, IIGJJ, expressed his great pleasure in releasing the prospectus and remarked that the new affiliation will lay the foundation for the future success of the institute.

Pic Cap: Dignitaries at the release of the publication