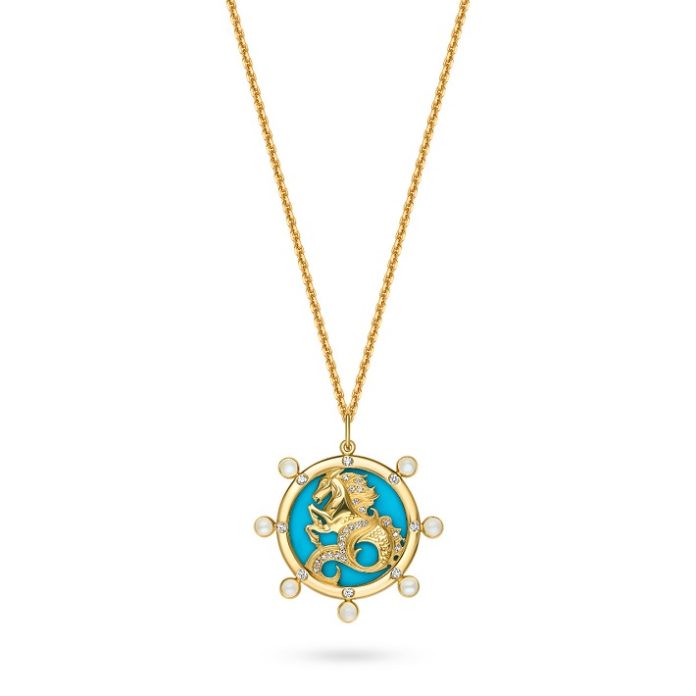 New York, NY. September 26, 2022. When Hellenic deities divided the lands so each would have a lot, the marvelous island of Atlantis was bequeathed to Poseidon, the ancient Greek God of the sea, storms, earthquakes and horses.  Atlas, Poseidon’s son, became king of the Atlantis and the ocean, while his siblings were given land to oversee within the island. The Atlantic Ocean was named in Atlas’ honor. As the Atlantean empire conquered other countries and cities, the Athenians resisted, forming alliances, while wars broke out against the empire. Then earthquakes and floods consumed the island, sinking Atlantean warriors and the whole island into the sea. From this tragedy, a magnificent creature was conceived—the Horsea. Honoring its beauty and memorializing it into talismanic form, equestrian fine jeweler Karina Brez launches the Horsea collection, featuring three new medallion styles.

Poseidon, who created the first horse, could not bear to see the loss of his beloved animal. Therefore, as the horses descended into the ocean, he transformed each horse into a Horsea—a mythological, majestic creature that dwells amongst the sunken lost city. To protect the Horsea from the catastrophic earthquakes and floods, Poseidon collected the treasures of Atlantis—the pearls, gems, diamonds and gold, affixing them to the horses as they commenced their metamorphosis. Its golden scales have magical, healing powers, and wearing its likeness as a talisman is said to bring good luck and health to the wearer.

“The development of mythology and fusing of its stories to our lives is ever-evolving,” says Karina Brez. “The Horsea not only continues an ancient story, but it offers a tangible connection to it. Connecting those who have a passion for the equestrian, or the ocean, to storytelling is an expansion of creativity and human nature. These medallions celebrate the origin story of the Horsea and are the beginning of what will be an expanding collection, where modern mythology meets equine style.”

The Horsea Collection consists of three new medallion styles. The Under the Sea Medallion features a golden Horsea, surrounded by seven cabochon-cut gemstones (moonstone, opal, sapphire, garnet, emerald, ruby and turquoise) floating amongst a round center cut gem, with diamonds. The Night Star Medallion features the top half of the Horsea, as it leaps out of the sea in the evening. It is a solid gold medallion, with four gemstone cabochons and diamonds glittering on both the Horsea’s body and the stars. The Night Star Enchanted Medallion also features the top half of the Horsea, but with a round center cut gemstone background (lapis lazuli, black mother of pearl, white mother of pearl, malachite, and turquoise) and sparkling diamond stars.

The Horsea collection is launching this week, at the Capital Challenge Horse Show in Upper Marlboro, Maryland, and online at karinabrez.com. For sales inquiries or retail partnership inquiries, contact Karina Brez at 561-400-4085 or email wholesale@karinabrez.com or info@karinabrez.com.

A first generation Ukranian-American, Karina Brez earned the title of Miss Florida USA in 2012, and was inspired to design a jewelry collection after fellow contestants were impressed by the design she created for her own pageant dress. A horse enthusiast with a passion for gemstones, Brez completed the GIA Graduate Gemologist program, is an appraiser, and advocates for non-profits introducing children to the healing power of horses. Her signature fine jewelry collections are Huggable HoovesÒ™, Horse LUVÒ™, Bit of LUVÒ™, Lucky Horseshoe and The Garden Collection. In 2020, Karina Brez was voted one of the top three Equestrian jewelers by Equestrian Living Magazine. She opened a retail location in Palm Beach, Florida in 2021.

Is drop shipping a better option to manage inventory for selling...