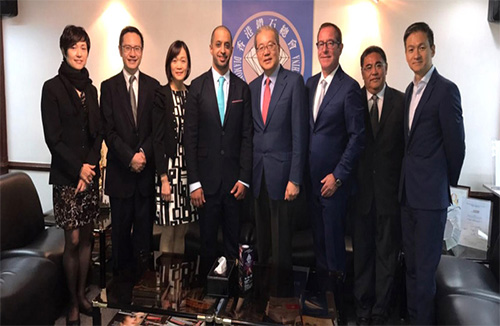 The present KP Chair, Ahmed Bin Sulayem recently visited Hong Kong where he conducted discussions with delegations from the Diamond Federation of Hong Kong, as well as with representatives of leading jeweller Chow Tai Fook on the various programmes he initiated over the last year.

The visit is a continuation of the series of high-level visits with heads of states and senior ministers across diamond producing and consuming nations in Africa and Europe that Bin Sulayem conducted over the past one year. Among the topics of discussion was rough diamond valuation and the role that it could play in delivering fair value to source markets in Africa, as well as the Chair’s proposals to set up a common fund for NGOs and to establish a Permanent UN Secretariat for the KP.

“Although we are now past a successful Plenary, our work as KP Chair is not done,” said Bin Sulayem. “During the time left at the helm of this vital initiative, it is essential to continue engaging more industry players in a constructive dialogue around the role they can play in enhancing the KPCS, and therefore, the diamond industry as a whole. We have already managed to engage numerous governments, but diamond retailers are in a unique position to support the proposals that were discussed at the Plenary and are seen by many stakeholders as vital elements for the future of the KP.”

He also said that given Chow Tai Fook and China’s scale and global importance in the industry, they could play a vital role in supporting discussions around traceability and be at the forefront of driving marketing campaigns to ensure consumer trust in the integrity of the supply chain.

“Initiatives around rough diamond valuation could further contribute to global transparency, especially as these retailers are looking to work more closely with mining companies in the years to come. This will ultimately help strengthen the entire diamond supply chain and allow African miners to get a fair share of their mineral resources,” he added.‎

Following this visit, the KP Chair will travel to Japan to continue raising awareness and discuss topics related to KPCS.

Ekati Mine has sold and will Restart in early 2021