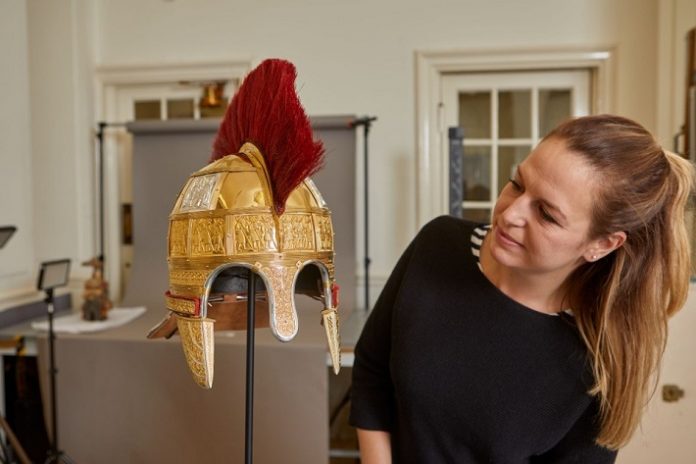 Birmingham City University’s School of Jewellery has helped to produce two reconstructions of a high-status helmet contained within the Staffordshire Hoard.

The Staffordshire Hoard was found in a field near the village of Hammerwich, near Lichfield in Staffordshire, in 2009. It is the largest collection of Anglo-Saxon gold and silver ever discovered.

Heavily damaged before it was buried, the 7th-century treasure contains more than 4,000 precious fragments, approximately a third of which are now known to come from a single, very high-status helmet.

Experts studied thousands of rare fragments – believed to be more than 1,300 years old – to build a picture of the original helmet. They then spent 18 months using both cutting-edge technology and ancient craft techniques to make replicas of the internationally-important find.

From 2014 to 2017, the helmet was studied as part of a major research project funded by Historic England and the museums which care for the Staffordshire Hoard collection. The extensive research enabled experts to identify the fragments which belonged to the helmet, believed to have been made around AD 600-650.

Helmets of this period are incredibly rare – there are only five other Anglo-Saxon helmets known. The detail and bold crested design means the Staffordshire Hoard Helmet is likely to have had an important owner.

The reconstructions were created by a team of specialist makers. The School of Jewellery at Birmingham City University led on the fabrication of the precious metal elements of the helmet. Laser scanning of the original objects was used to ensure the replica pieces are as close to the surviving original parts as possible.

Commenting on the process Frank Cooper, Senior Lecturer in Jewellery Manufacturing Technologies at Birmingham City University, said: “This is one of the most diverse, interesting and certainly challenging projects we have ever taken on in the almost 130-year history of the School of Jewellery.

“I must acknowledge the tremendous contribution of my team in the School’s Centre for Digital Design and Manufacturing, as without their diverse talents, technical skills and jewellery expertise coupled with boundless enthusiasm and sheer hard work, this project could have remained but a fanciful dream.

“A major challenge was digitally correcting the damaged and missing elements of the helmet’s many components. To achieve this we turned to our laser scanning and CAD skills to create digital files which were then used to drive our CNC milling and 3D printing technologies. From this point forward we reverted back to our jewellery craft skills to cast, stamp and polish and even rivet the collection of components to produce the magnificent helmet can now see.”

Despite the intensive research project, there are still many questions to be answered about the helmet, including who exactly it would have been made for. The Staffordshire Hoard Helmet is comparable to the Sutton Hoo Helmet from Suffolk, of which a famous reconstruction is on display at the British Museum. That helmet is thought to have belonged to a king or prince.

Dr Ellen McAdam, Director of Birmingham Museums Trust, said: “After nearly 10 years the Staffordshire Hoard is still giving up its secrets. Research has now shown us that the Hoard contains fragments of a helmet. Only Anglo-Saxon Kings wore helmets, and this is one of a very small number ever to be found.

“It has been carefully reconstructed by scholars and craftspeople to give us an insight into the way Anglo-Saxon warriors lived and fought. The displays in Birmingham and Stoke-on-Trent will share the results of research with the public to help them understand how the Hoard came into being.”

The helmet reconstruction project was made possible through fundraising by Birmingham Museums Trust and The Potteries Museum & Art Gallery, Stoke-on-Trent, and is based on a major research project funded by Historic England and the museums. The research will be published in 2019 by the Society of Antiquaries of London and the Archaeology Data Service.

Igor Simonov to head occupational health and safety at ALROSA

Industry
Sales of custom-made jewelry have spiked since COVID-19 lockdown, says a cutting and polishing firm in South Africa. Nungu Diamonds has experienced unprecedented demand for...

News & Trends
Buyers in the major markets of the US, China and India still intend to purchase diamond jewellery as holiday gifts despite a challenging scenario,...
- Advertisement -