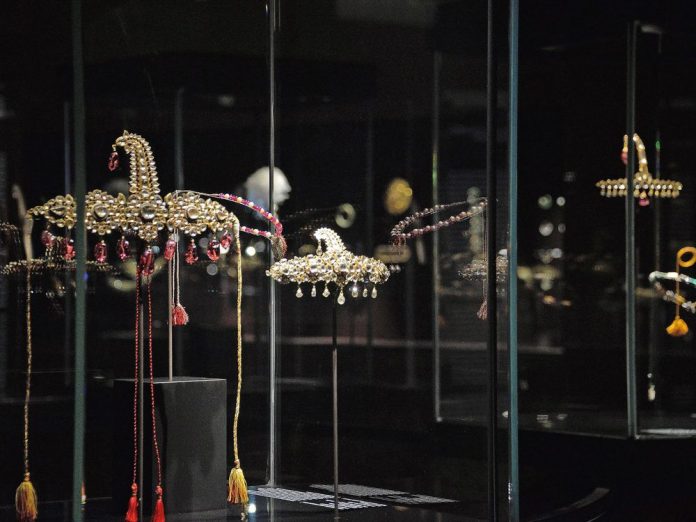 ROME — One was a delicate, tasseled pendant, featuring a flawless 10-carat diamond surrounded by a ring of rubies and diamonds. The other was simpler but no less gorgeous: two pear-shaped 30.2-carat diamond earrings surrounded by smaller, irregular-cut diamonds suspended like starbursts.

The Al Thani Collection on Friday revealed details of the precious jewels stolen Wednesday from a Venetian palace exhibit in a brazen theft that sorely embarrassed Italian security officials. A manhunt has been launched for the thieves, who calmly pocketed the gems and mixed in with the crowd to make their getaway.

The collection, assembled by Qatar’s Sheikh Hamad bin Abdullah Al Thani, hasn’t revealed the value of the stolen pieces. But news reports have estimated they are worth a few million euros.

Al Thani said the two pieces were designed by Bhagat Jewelers, the exclusive Mumbai jeweler, in 2011 and 2014. Bhagat jewels, known for the unique craftsmanship, quality gems and one-of-a-kind designs by Viren Bhagat, can fetch into the seven figures.

Common to both stolen pieces and Bhagat’s style are the unique, minimal platinum settings that make it look as if the jewels are floating, Al Thani said.

Surveillance footage of the theft Wednesday at the Doge’s Palace in Venice show one of the thieves calmly opening the showcase window, as if he had a key, putting the jewels in his pocket and sauntering off while another stands nearby watching.

Police say the alarm was triggered a minute later, giving the thieves time to escape. That makes them think the job was done by professionals who knew what they were doing and what they wanted. A gold necklace in the same display case was reportedly left untouched.

The Al Thani Collection is a renowned collection of 270 pieces of Indian and Indian-inspired jewelry and precious stones, jades and artifacts, spanning 400 years from the Mughal period to the present. The more modern pieces are often Art Deco in style, evidence of the popularity of Indian motifs and gems that inspired Cartier and other jewelers in the West in the last century.

The Venice exhibit, located in the famed Palazzo Ducale on the on the edge of St. Mark’s Square, was the latest stop in an exhibit “Treasures of the Mughals and the Maharajas” that has brought the collection to Paris’ Grand Palais, London’s Victoria and Albert Museum, New York’s Metropolitan and the Miho Museum near Kyoto, Japan.