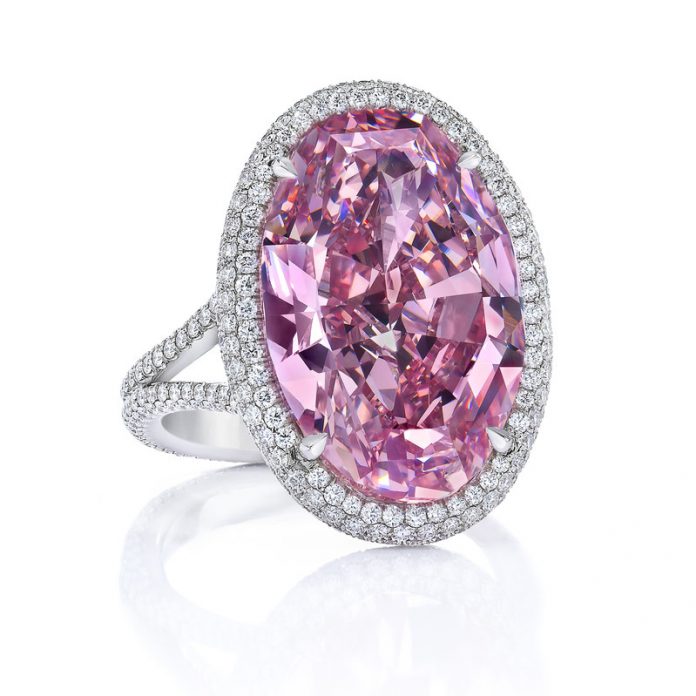 New York, NY (November 28, 2017) – The highlight of Christie’s Magnificent Jewels Hong Kong auction, a 14.93 carat Fancy Vivid pink diamond, sold for $31,861,000 USD, matching a world-record per-carat price for a pink diamond, a price far higher than comparable pink diamonds have achieved in recent years. Known as “The Pink Promise Diamond,” the scintillating pink oval mixed cut stone had delighted collectors and jewelry lovers as it toured New York, Geneva, and Hong Kong prior to the auction. Its Fancy Vivid Pink designation by the Gemological Institute of America (GIA) represents the rarest and most prized color grade in pink diamonds. The sale of the Pink Promise diamond represented a lucrative gamble for its previous owner, diameter and Haute jeweler Stephen Silver. His visionary gift for detecting sometimes hidden qualities in gemstones led Mr. Silver to recut what was originally a 16.21-carat Fancy Intense pink diamond in a quest to achieve the stone’s maximum color potential. The exhaustive and risky recutting process led to “The Pink Promise” and its impressive auction sale.

Stephen Silver bought the original 16.10-carat Fancy Intense pink diamond in June of 2013, but with the practiced eye of a Gemological Institute of American (GIA) certified gemologist, he noticed that the stone’s cut made some areas of the stone appear to be washed out. In fact, this represented an opportunity to recut the stone and possibly achieve a higher color grade. Over a period of three years, Mr. Silver worked with a master gem-cutter to carefully plot a new cut for the ultra-rare Type IIa pink diamond, cutting the gem down facet by facet to save the most carat weight while coaxing the stone to yield the highest possible color. With each carat cut, Stephen Silver and his cutter gambled potentially millions of dollars in lost carat weight if the trimmed down stone failed to raise its color grade as hoped. Finally, a new GIA certificate affirmed that “The Pink Promise” diamond, with its final weight of 14.93 carats, had officially attained its latent potential and a new Fancy Vivid pink color grading, and a significantly higher appraisal value. A promise fulfilled, the stone was aptly named “The Pink Promise.” The ultra-rare Type IIa Fancy Vivid pink diamond was also assessed with a VVS1 clarity—the grade just under flawless—with no imperfections visible to the naked eye, and nearly imperceptible flaws revealed under magnification.

“The Pink Promise” wasn’t Mr. Silver’s first foray into purchasing important colored diamond stones. Over his career, Stephen Silver has cultivated a reputation amongst color gemstone collectors as a global leader with an extraordinary ability to procure, design, and handcraft the world’s finest jewelry and gemstones. Mr. Silver has worked with (and re-imagined) some of the most precious and coveted stones in the world, including precious fancy color diamond cuts in Fancy purplish red (“The Cranberry”), Fancy Vivid orange, “The Million Dollar Pumpkin” (as seen on the Today Show), and Fancy Vivid blue, each ranging from 1 carat – 6 carats in size. Given that only one in one thousand diamonds mined can be classified by GIA as truly Fancy color diamonds, color stones of this size and quality are extremely rare. With each increase in clarity and carat size, as evidenced by “The Pink Promise,” their value surges exponentially.

Mr. Silver also specializes in collecting significant signed and period pieces. Notably, Mr. Silver acquired the Cullinan Blue Diamond Necklace in 1992, donating it in 2010 to the Smithsonian National Museum of Natural History ̶ the second largest donation to the institution’s Gem and Mineral Collection in its history. Stephen has also previously acquired the iconic Cartier Croc Sapphire Panther Brooch. “The Pink Promise” marked the next benchmark in his remarkable gemological career and his largest and most valued stone acquisition project to date. Remarking on “The Pink Promise” and its historic sale, Stephen Silver commented:

“The work we did on this particular diamond was the most challenging recut in which I have been involved, due to the technical difficulty and large financial risk. It is a privilege, however, to work with a world-class team and have my name associated with one of the world’s great gemstones.”

Stephen Silver is a Silicon-valley based gemologist, geologist, diameter, and philanthropist. Over the course of the last 35 years, Silver has established a reputation amongst his global network of jewelry industry contacts and elite gemstone collectors for his expertise in diamond and color gemstone cutting and jewelry design.

Intrigued by science and minerals from a young age, Silver studied geology at San Diego State University and earned a graduate degree from the GIA. Stephen began his career in Los Angeles at one of the largest diamond and colored gemstone grading, cutting, and sorting operations in the world. Returning to the San Francisco Bay Area where he spent his youth, Silver founded an estate jewelry firm specializing in antiques and precious stones. There, he gained access to a number of history’s most important colored gems, including the famous Cullinan Blue Diamond necklace. He went on to purchase this historic piece and donate to the Smithsonian National Museum of Natural History. Stephen Silver expanded his business into a vertically integrated wholesale manufacturer and retail operation of international reach, with two locations based in and around Menlo Park, California. Beyond his renown as a gemstone and jewelry expert, Stephen is also recognized in Silicon Valley for his extensive philanthropic work, having donated millions in recent years to causes in his community.