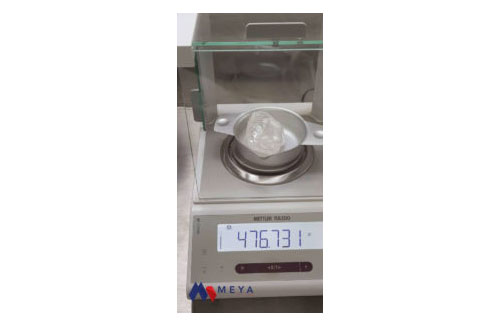 Trustco Group Holdings Pvt Ltd has announced that it has sold the 476.89 carat ‘Meya-Propserity’ diamond discovered last month in Sierra Leone to a first tier Global jewellery brand for US$ 16.5 million. It added that an additional bonus payment of US$500,000 shall be payable, should the largest polished stone be graded as D Flawless by GIA.

The stone is the 29th largest rough diamond ever discovered.

The board of Meya Mining, which discovered the diamond during exploration operations in the Kono District in eastern Sierra Leone where it has a licence, accepted the private bid after extensive deliberation and consultations with market experts and two independent valuators, the statement from Trustco said.

In addition, the Company revealed that it had also completed the sale of rough diamonds recovered from first bulk sampling operations in the Kono region. It reported that the first 5,162 tonne in situ kimberlite from bulk sample 1, labelled as the Meya River Sample, was processed during November 2017 and a total of 3,333.23 carats was recovered, including the 476.89 carat Meya Prosperity diamond.

All the rough diamonds, apart from the 476.89 carat Meya Prosperity, were placed on tender, which was facilitated by Miranel BVBA in Antwerp, from 5 to 12 December 2017. Of these, 419.46 cts were withdrawn from Tender on 15 Dec 17 due to offers not reaching reserve price, and will be included with the next Tender in January 2018.

Meya plans to conclude the bulk sampling program by March 2018.

Diamond Delights: 6 Jewels From A. Link