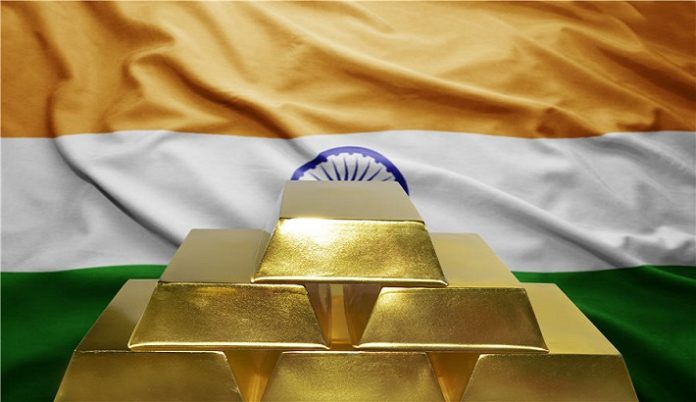 India’s central bank is likely to join counterparts in Russia and China scooping up gold this year, adding to its record holdings and lending support to worldwide bullion demand as top economies diversify their reserves.

The Reserve Bank of India’s purchases is part of a wider picture across developing economies that are looking at de-dollarizing their foreign-exchange reserves, according to Ross Strachan at Capital Economics Ltd. The RBI’s buying trend can be sustained for a number of years in relatively small quantities, as part of a long-term diversification, he said.

The RBI may purchase 1.5 million ounces in 2019, or about 46.7 tons, according to Howie Lee, an economist at Oversea-Chinese Banking Corp., with an outlook based on extrapolating amounts bought in the first two months of this year. 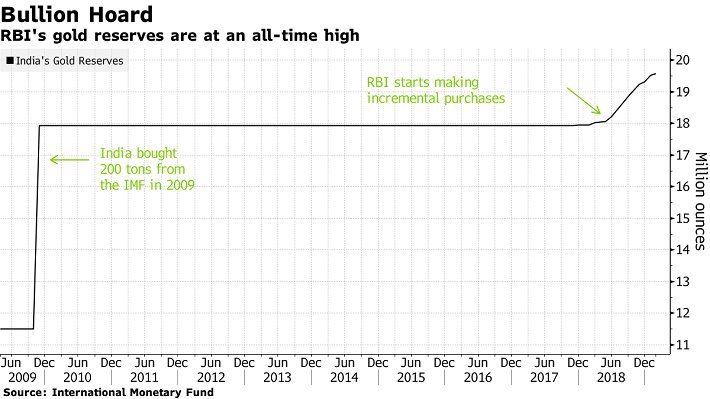 The RBI increased its stash by about 42 tons last year, and after adding more in January and February, the country’s gold reserves now stand at a record high of almost 609 tons, according to data from the International Monetary Fund. Russia bought 274 tons in 2018 and has added more this year, while China’s central bank is on a renewed buying spree that began in December. Global official sector gold purchases could reach 700 tons in 2019 led by these countries as well as Kazakhstan, Iran, and Turkey, according to Citigroup Inc.

Heightened geopolitical and economic uncertainty pushed central banks to diversify their reserves and focus on investing in safe and liquid assets, with governments worldwide adding 651.5 tons of bullion last year — the second-highest total of purchases on record, according to the World Gold Council.

Further inflows — expected to run as high as 2018 as China, Russia, and Kazakhstan buy — should also be supportive of prices, according to Goldman Sachs Group Inc. Spot gold has lost about 5.6 percent since a peak in February as equities rallied.

“There seems to be some form of a pattern, not just the RBI, that central banks tend to increase gold reserves when the global macroeconomic environment is uncertain,” OCBC’s Lee said. “It’s no coincidence that one of the biggest buyers of gold in recent months was China, which is in the midst of trade tensions with the U.S. and may have been seeking to diversify its trillions of dollar reserves.” India may be following a similar tactic of diversification, he said.

The trade war between the U.S. and China has disrupted supply chains, whipsawed markets and weighed on the world economy. In March, Donald Trump announced he plans to end key trade preferences for India and Turkey and notified Congress of his “intent to terminate” benefits, starting a 60-day countdown before the president can take the action on his own authority.

While the RBI didn’t respond to a request for comment, its annual report for 2017-2018 released in August said diversification of foreign currency assets continued during the year and that the “gold portfolio has also been activated.”

Diversification
The rising U.S. deficit and the Federal Reserve signaling a pause on interest rate hikes could be factors that may potentially compel the RBI to add more to its gold holdings, according to Shekhar Bhandari, the Mumbai-based business head of global transaction banking and precious metals at Kotak Mahindra Bank Ltd.

India’s foreign-exchange reserves are improving steadily and foreign fund inflows “are strong, hence buying U.S. Treasuries and gold will help keep the rupee on the weaker side and give a boost to exports,” he said.

The Indian rupee, which was Asia’s worst-performing major currency in 2018, has been strengthening in recent months due to strong foreign inflows into the equity and debt markets. Investors, though, remain wary of risks in the form of an increase in oil prices, a swing in global risk appetite and federal elections in the country.

There’s room for more diversification — while India’s gold holdings are the 10th-largest by country, they account for only 6.4 percent of its reserves, compared with more than 70 percent in Germany and the U.S., WGC data show.

“This is an argument for further buying,” said Carsten Fritsch, senior commodity analyst at Commerzbank AG in Frankfurt. “It is too speculative to say how much gold the RBI will buy this year. It could be more than last year, though.”

Art-Deco Pieces on display at Jewellers Association Show 2016 by Jaipur’s...