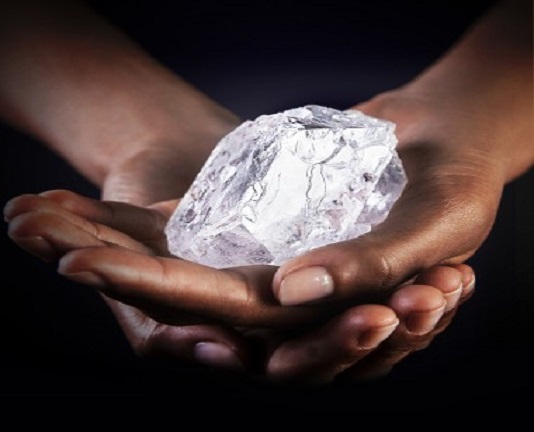 After a bumpy sales process that included a failed Sotheby’s auction, the 1,109 ct. Lesedi La Rona—considered the largest diamond still in uncut form—has finally been sold.

Graff Diamonds bought the stone for $53 million, or $47,777 per carat, following a year of negotiations. The stone, whose name translates to “Our Light” in Botswana’s Tswana language, was recovered from the Lucara Diamond–owned Karowe mine in Botswana in November 2015. It is believed to be, depending on the reference consulted, either the second or third largest rough diamond ever found.

While there had been speculation that a future owner might want to keep the stone intact, a statement from Graff indicated that he planned to cut it.

“The stone will tell us its story, it will dictate how it wants to be cut, and we will take the utmost care to respect its exceptional properties,” said a statement attributed to the company’s founder Laurence Graff.

Graff did not respond to a request for comment, but Lucara CEO William Lamb told JCK he expects the company to spend a month or two analyzing the stone.

“I have always stated that a stone of this significance should remain a collector’s piece,” he added. “I do believe that Graff will create something truly amazing from the diamond which once produced will sway my opinion of it staying in the rough.”

In a move considered a risk, in June 2016 Lucara put the rough stone up for auction at Sotheby’s, a rare move for an uncut stone. However, the stone failed to meet its $70 million reserve.

In a statement, Lamb called the price paid by Graff “an improvement on the highest bid received at the Sotheby’s auction.” That bid, the only one the stone received, was $51 million.

“The auction route was our hope to create an alternative collectors market for some (not all) of these stones,” Lamb says now. “Unfortunately, the rarity of a rough diamond of this size is not well understood and when selling a stone like this…the general population does not understand the rarity and mining processes required to recover even the smallest diamonds. Education about the market in general is required.”

In May, Graff purchased a 373.72 ct. stone that was once connected to the Lesedi La Rona.