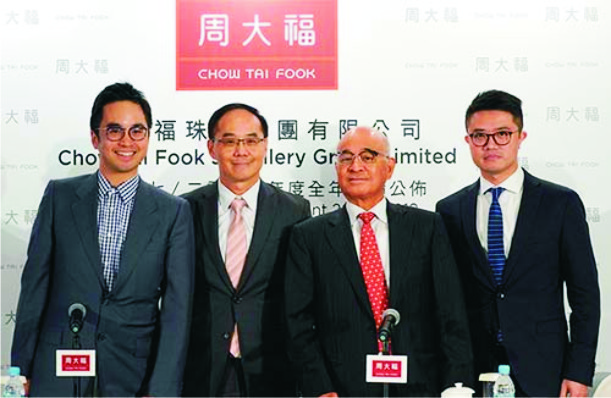 In a statement announcing their results, the Group said that while adjusted gross profit margin was down by 130 basis points during the year, core operating profit surged by 20.6% to HK$5,606 million (FY2017: HK$4,649 million) due to the encouraging business performance and operating leverage.

The overall vibrant performance for the Group was driven by the continued recovery trend in the main markets, Mainland China and Hong Kong and Macau.Same Store Sales Growth (SSSG) was stronger in Hong Kong & Macau (10.2%) and marginally lower in Mainland China (8%), though, after including the e-commerce business, Mainland China SSSG would be 10.8%. Increases were registered in the Average Selling Price (ASP) as well as in terms of volume, the retailer said.

E-commerce business accelerated and registered a significant growth of 73.2% in FY2018, benefitting from a strengthened co-operation with the Group’s major online platform partners. It contributed to 4.8% of retail sales value and 12.5% of retail sales volume in Mainland China.

In FY2018, the Group opened a net of 204 points of sale, bringing the total number to 2,585 as at 31 March 2018. In Mainland China, net openings reached 203 POS, of which 199 were opened under Chow Tai Fook Jewellery brand, while in Hong Kong and Macau, a process of consolidation in moving from ‘tourist’ areas to residential areas, resulted in net closures of 3 POS in FY2018. The Group also opened 2 POS in Korea and 2 POS in Japan during the financial year.

In Mainland China, the Group would remain selective in openings and focus on uplifting the ASP in Tier I and II cities, while market penetration in lower tier cities would be the priority in the light of the rapid urbanisation and infrastructural development in these areas.

The Group has launched the “Smart+ 2020” three-year strategic work plan since FY2018 committing to delivering seamless experiences to customers in the long-term with five areas of focus: (1) introducing more product offerings and innovations coupled with the launch of multi-brand strategy; (2) enhancing in-store experiences and fostering omni-channel retailing; (3) cultivating customer-led manufacturing capabilities and versatile supply chain to reinforce a personalised shopping journey; (4) investing in big data analytics to empower insights for a more efficient operational model that can respond to fast-changing consumer preferences; and (5) inspiring an innovative and entrepreneurial culture for talent development across the Group and the jewellery industry as a whole.

Chow Tai Fook Chairman Dr. Henry Cheng remarked, “Chow Tai Fook is proudly approaching the 90th anniversary. We will, as always, continue to uphold our leading edges to bring our business to fruition by meticulously executing our “Smart+ 2020” strategic framework. We believe that the customer-centric approach fortified with our iconic and trusted brand value would further solidify our status as the industry leader.”