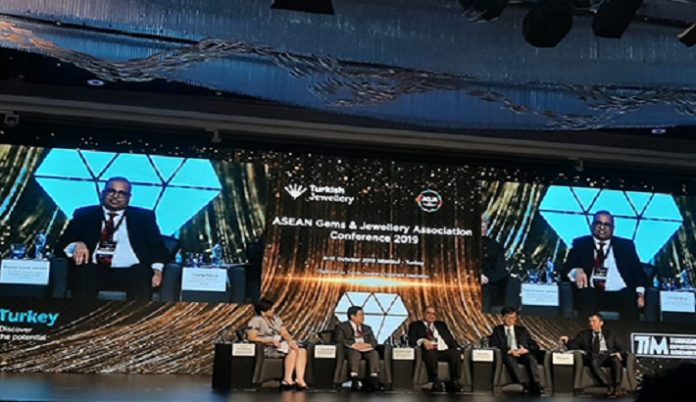 GJEPC Chairman Pramod Kumar Agrawal addressed the 8th ASEAN Gems and Jewellery Association Conference hosted by the Jewellery Exporters’ Association of Turkey in Istanbul on
October 9, 2019. The conference was held the day before the opening of the 49th edition of the Istanbul Jewelry Show.

India has been a participant in the ‘ASEAN plus 6’ initiative to increase cooperation and trade in the region under the proposed Regional Comprehensive Economic Partnership
(RCEP). The proposed FTA under this will also cover the gems and jewellery sector. GJEPC has represented India in the g&j sector and this was the third time it was participating
in the ASEAN G&J Association’s conference.

Speaking at the session on “Easy trade, trade wars and free trade agreements”, GJEPC Chairman Agrawal called for an increase in trade within the countries in the region without
in any way compromising each other’s mutual interests. He said that this could be achieved “through rationalising of taxes and simplifying the rules of negotiation in FTAs”.

Expressing the confidence that regional partnerships can help participating countries emerge as prominent players of value-added products in the sector, Agrawal called for “a
level playing field for our self and all the members of ASEAN and other partner countries so that together we can grow and contribute to the gem and jewellery industry
globally”.

The Chairman also outlined many of the recent measures announced by the Government of India to enhance ‘Ease of Doing Business’ and pointed out that its “ambitious programme and
regulatory reforms, amid at creating a business-friendly environment” had seen the country moving up 23 places in the World Bank’s Ease of Doing Business report of 2019.

Agrawal mentioned that India has many free zones/ jewellery parks for manufacturing of gems & jewellery in various clusters, as well as a new Jewellery Park that GJEPC is
setting up in Mumbai which will accommodate more than 2,000 manufacturing units.

He concluded by reminding those present that 100% FDI is allowed in the gems & jewellery sector in India, and while saying that “this is the perfect time to do business with
India… (to) collaborate with Indian companies for mutual benefits”, also added that “Indian jewellery manufacturers are open for entering into collaboration for setting up of
manufacturing facilities in any country”.

Earlier, addressing the inaugural session of the Conference, Turkey’s Deputy Trade Minister Riza Tuna Turagay had said that Turkey with exports of US$ 4.4 billion in jewellery
last year, had a 4% of share global jewellery exports, and that the country had the potential to further increase its offerings to the world markets.

He added that last year Turkey had seen a surge in demand from the ASEAN region with exports to these countries rising by 82% in the last year to reach US$ 50 million.

Kamar said that Turkey was selected as host because of its many significant achievements in exports and the effective role it played in the global jewellery market.

While in Turkey, GJEPC Chairman Agrawal also took part in the inauguration of the October edition of the Istanbul Jewelry Show, which has 800 exhibitors and an expected 19,000+
trade visitors.

Later, Agrawal also visited KUYUMCUKENT in Istanbul which is said to be the world’s biggest integrated gold, silver and jewellery production and trade center, having 3,000
operational units ranging in size from 300 sq ft to 3,000 sq ft. It also houses a Mall for B2B and retail sales, small manufacturing units with or without display shops for B2B
sales. The centre is a privately-run park, built and managed by a cooperative.