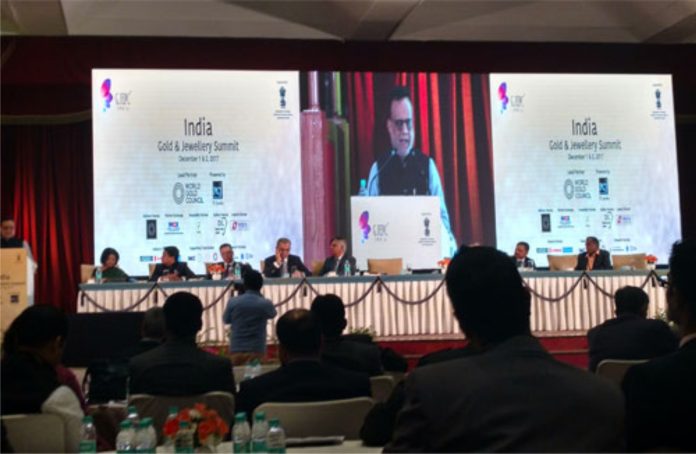 With Day One having defined the broad direction of change for the industry as it seeks to achieve its target of US$ 25 billion of jewellery exports by 2025, attention on Day Two moved on to cover various particular aspects of the policy framework that would be required for the purpose. It witnessed a fairly open and constructive dialogue between the government and the industry, raising hopes for the emergence of a positive policy framework in the not-too-distant future.

Two key sessions were, in fact, headlined by top government officials with Hon’ble Finance Secretary Dr Hasmukh Adhia spearheading discussions on the focus of a proposed gold policy, while the deliberations on the Prevention of Money Laundering Act (PMLA) was led by Mr Balesh Kumar, Principal ADG & DG of GSTI.

The panels for each session also featured other officials including Mr. J.K. Dadoo, AS&FA, Mr. Manoj Kumar Dwivedi, JS, both from the Ministry of Commerce and Mr D.K. Gupta, Special Director, Enforcement Directorate.

Providing a context for the discussions in his opening remarks to the session on Gold Policy, GJEPC Chairman Praveenshankar Pandya said, “We all appreciate the importance of bold policy measures, especially after demonetisation has brought almost all the transactions in the diamond industry into the formal banking sector, something we were not able to achieve in nearly four decades.”

Stressing that the angadia system was now getting extinct and even the smaller players were carrying out their business through the banking channels, he said that the gold jewellery segment would also benefit from bold forward-looking policies. He outlined some of the areas where policy needed to be modified and clearly defined, appealing to the government to put in place a Five Year Plan for steady supply of gold to exporters; develop a clear framework allowing companies to take on job-work; strengthen manufacturing infrastructure through jewellery parks and CFCs, etc.

He particularly reuquested the Finance Secretary to consider reducing the import duty on gold to 4-5% from its present level of 10%, which was indirectly encouraging the grey market. He also asked for a mechanism by which NRIs or members of the Indian diaspora could make purchases within the country by paying directly in foreign exchange and treating such purchases on par with exports, and hence duty free.

Strengthening the argument for a cogent policy, Aram Shishmanian, CEO, World Gold Council, called on the government to “guard and protect the eco-system around gold as a commodity….(while) ensuring it is safeguarded against unintended consequences of policy change”. He said, “India needs to play its rightful role on the global stage by building a dynamic gold industry based on product integrity and price transparency. With the correct approach in a few years, the industry will come into the mainstream, employment can double and both exports and production for domestic consumption can grow significantly.”

Responding to the presentations, Dr Adhia made three key observations, “Firstly, the gem and jewellery industry, as a large scale generator of jobs, is extremely important to the government. Secondly, the two major reforms undertaken in the last year, demonetisation and GST, have helped curb the parallel economy, and will benefit the legitimate trade across industry. Thirdly, the government is committed to helping grow the export trade and looks forward to the day when jewellery exports exceeded domestic demand.”

While responding to questions, he clarified that a review of the import duty on gold would only be possible once a clear trend emerges about GST revenue. Even as he pointed out that the imposition of 5% VAT on jewellery in Dubai would reduce the differential between prices in that region and India, he stressed that the government would keep in mind the role played by the jewellery industry in employment generation when it reviews the duty structure.

Dr Adhia welcomed the suggestion for a gold policy and a Gold Board, but suggested that it was for the Commerce Ministry to take the discussion forward.

In his remarks, Mr Dadoo said that the first step that should be taken by the industry was to spell out a clear strategy to implement its vision for growth. He said that creating a proper infrastructure to train designers and to provide small scale sector units with access to modern technology was one of the keys to growth. “The ministry will work closely with the industry to develop such institutions, and is also finalising plans to set up about 20 Common Facility Centres (CFCs) across the country.”

After a detailed presentation on PMLA by Mr Balesh Kumar where he pointed out that the legislation was part of a global initiative to curb laundering of illicit money and its use to finance global crime and terror, Advocate Rohan Shah, a legal expert who has been a consultant to the diamond and jewellery industry on various taxation and policy issues, spoke on behalf of the industry. He stressed that while the government felt that the industry should play the role of a partner in its attempt to curb illegal transactions and trade, the jewellers actually perceived this as another step in the direction of regulation.

He pointed out, “This is an industry that carries the scars of the Gold Control regime and after many decades of non-regulation, has now faced a number of new regulatory measures in recent years including Excise, PMLA and GST. There are so many small players who want to comply, but don’t even have a computer or good web connectivity, let alone the other infrastructure needed to do so.”

Shah added that jewellers are fearful that they will be subject to inspection and harrassment and, while that may not be the intention at the top, even a single officer who is dishonest can affect perception across the board.

His suggestion, that the government work to build a consensus was widely welcomed by all the panellists, with Mr Manoj Dwivedi suggesting that a balancing act was needed by looking at both the desirablity of an action and its practicality. He hoped that the experience of the Ashok Lahiri committee which evolved a consensus on the excise issue would be a model that could be followed in this case too.

In another important session of the day, a distinguished panel concluded that a Gold Exchange was extremely necessary in India. It would not only bring in standardisation and a degree of price transparency, but would also create Indian price benchmarks for the global trade. All agreed that a starting point would be a clear cut regulatory framework; other details such as the type of products that could be traded, the logistics of deliveries etc could follow. Panellists from Dubai and Turkey aided the discussions by presenting the experiences of the exchanges set up in their countries.

A general opinion was that the conference would provide a new thrust to the industry at the local as well as at the all-India level.