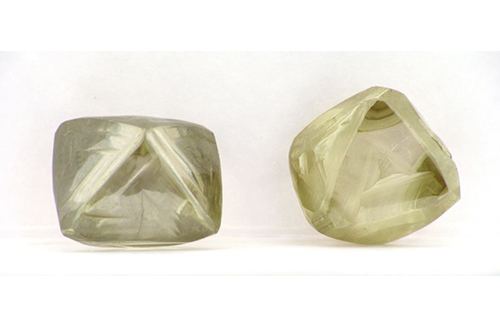 HRD Antwerp has reported that it recently came across two rough stones weighing 7.14 and 5.01 carats respectively, with a slight greenish colour, that had been cut to resemble rough diamonds. The lab said that though the stones were actually moissanite, they ‘felt’ like rough diamonds, and even diamond testing pens (based on thermal conductivity) pointed to diamonds, and their real identity could only be established based on density measurements.

The lab said that while these two stones would “set off the alarm bells of any experienced rough diamond trader or polisher”, there may be problems of detection if stones such as these, or smaller sizes of polished moissanite, are mixed into rough diamond parcels.

This is the second such ‘imitation’ rough diamond detected by the lab, HRD said, stating that in July it had reported on 2 topaz crystals cut to imitate rough diamonds.

In its statement on the incident, the lab says that moissanite is an important diamond imitation on the market. Synthetic moissanite, being silicon carbide, has fooled many experienced jewellers with its very high hardness (9.25 on the Mohs scale) and high refractive index (2.6 – 2.7). In addition it has a very high thermal conductivity, which has rendered some tests useless. The lab has said that the difference with respect to birefringence/doubling and the crystal system must be used to help distinguish the stone from a natural rough diamond.