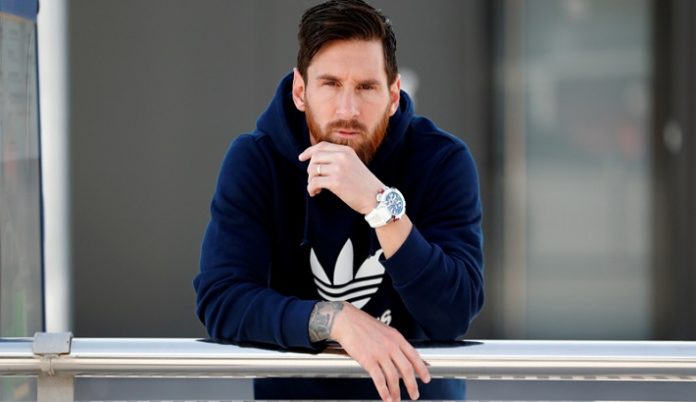 Now, the two have announced an official partnership.

“The Epic x Chrono ‘Messi’ is recognizable anywhere,” Jacob & Co. founder Jacob Arabo said, “and for us, it was the perfect way to begin a partnership with Messi and a true association of champions.

“The beauty of this finished product and our overall experience with the Messi brand thus far have also significantly raised our expectations for future releases. Admirers of the Epic x Chrono will surely be pleased with what’s to come.”

The style’s light blue and white colors are a tribute to Messi’s Argentinean heritage.

As a further homage to the player, the timepiece features his famous No. 10 in red on the flange ring, his logo on the dial at 6:00 and his signature on the glass sapphire back, which shows the automatic bi-compax skeleton chronograph movement.

One hundred and eighty models of the wristwatch are being produced, with the retail price beginning at $28,000.

“I am delighted to be in partnership with Jacob & Co, who I regard as the most innovate watch maker,” Messi said.

Diamond
Rio Tinto’s third-quarter diamond production fell 8% year-on-year to 4.2 million carats on account of lower grades at the soon-to-be-closed Argyle mine. For the quarter...
- Advertisement -