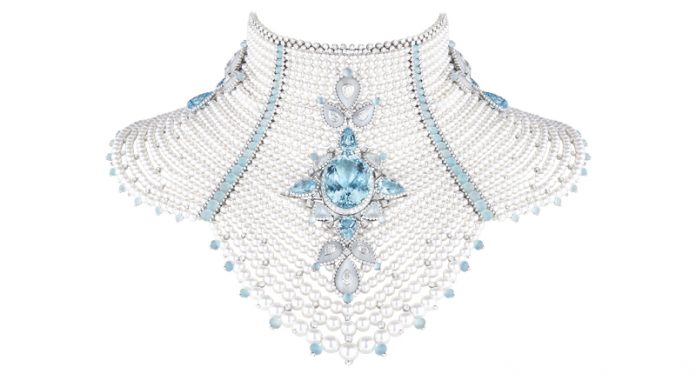 Whereas last year’s offerings were an ode to the palace’s baroque architecture and décor, this year’s iteration was a love letter to its gardens.

Spectacular gemstone color combinations lent the collection a vibrant palette and contagious whimsy, which was all the more striking when combined with the pieces’ strong geometric lines, meant to reference the gardens’ bold landscaping.

David Yurman took a more wearable approach to color, setting large colored gemstones like rubellite and peridot against a background of neutral white diamonds and white gold or platinum. Much of the interest in the pieces was in the bold, architectural designs of the settings.

The American design house also showed pieces from its Night Petals collection, inspired by flowers seen in the moonlight and high jewelry versions of its pearl pieces and Stax collection.

According to Boucheron, the brand was the first French jeweler to open a store in Moscow, in 1897. Their high jewelry offerings, called Hiver Imperial, or Imperial Winter, referenced these beginnings.

In Paris, the designer showed elaborate designs that often were anchored around one prominent gemstone, such as a sugarloaf tanzanite or cabochon emerald.

Ahead of Nirav Modi’s return to Biennale des Antiquaires in Paris this September, the Indian jewelry house previewed some of its new pieces at haute couture/haute joaillerie week.

On display were suites featuring the exquisite gemstones Modi is known for employing in his work, as well as some of his patented diamond cuts. A 20.87-carat pear-shaped fancy yellow diamond ring was not to be missed.

Bodino envisions his colorful, gem-stone laden pieces worn casually rather than reserved only for formal events, which is why several of the pieces are convertible, becoming more or less impactful depending on how they are styled.

Cooksongold to launch revamped store to mark 100 years in business...