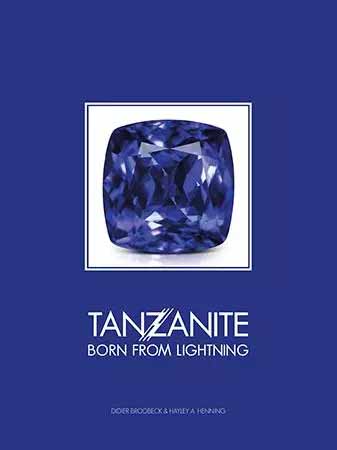 Fans of tanzanite will want to get their hands on a new coffee table book available now on amazon.com. Tanzanite: Born From Lightning is a two-year labor of love from longtime journalist Didier Brodbeck and former Tanzanite Foundation executive director Hayley Henning, featuring 208 pages of stunning, one-of-a-kind tanzanite jewels from brands like Cartier and Van Cleef & Arpels as well as respected independent artists like Lorenz Bäumer, Stephen Webster, Wallace Chan, and Erica Courtney. The book’s design and layout is the handiwork of Brazilian designer Ícaro Carlos, who helms The Luxury Studio and has experience working for high-profile brands in Europe and South America. The tome was published by Watchprint.com Sàrl in October.

Expect to read about how the gem was discovered in the foothills of Mount Kilimanjaro—including the personal accounts of early prospectors—as well as how the stone got its name. Also intriguing: The book marks the first tanzanite compilation of its kind, in that many of the participating designers and brands are rarely seen on pages side by side.

Henning opened up to JCK about the book and what readers can anticipate on its pages.

JCK: Tell me about your contributions to the book and why you chose to be involved with the project.

Hayley Henning: Tanzanite has been such a large part of my life for over 15 years—seven with TanzaniteOne in Johannesburg and eight running the Tanzanite Foundation in New York City—so helping to make this book completed the circle. It was a team effort, with longtime journalist and author Didier Brodbeck, and our Brazilian designer and art director Ícaro Carlos; my contribution was my experience in the industry, knowledge of tanzanite—some of the sources from which we acquired stories, and many of the designers working with it. A lot of what I did was to connect designers and brands to the dealers, encouraging the use of tanzanite to build their collections and grow their businesses.

JCK: What will readers see and learn about tanzanite?

Henning: They will see incredible pieces of jewelry—works of art and one-of-a-kind jewels that have never before been seen. And what they will learn is that in the short space of time that tanzanite has been around—since 1967—it has made its mark and has a huge impact in the jewelry world, and quickly earned a seat among the ranks of better-known gems. It will certainly have its place in jewelry history.

JCK: What is one of your favorite pieces of jewelry in the book and why?

Henning: Tanzanite is one of my favorite gems, and every single piece that has been selected for the book is because of its uniqueness, beauty, and craftsmanship, which makes it very hard to choose just one! Each and every piece is absolutely incredible!

JCK: Tell me one surprising fact about tanzanite that most people don’t know.

Henning: It’s the rarity: Until you’ve actually been to the mining area and experienced it, many people do not realize that tanzanite is as rare as the experts say. Tanzanite is only found in one place on earth—a small 4-kilometer strip in the Merelani Hills of Northern Tanzania, and within the next 15 to 20 years there will be no tanzanite. Many people are still surprised to learn that is the reality.

JCK: What is your hope for the book?

Henning: I really hope that people like the book and are inspired to either own a piece of tanzanite or to design something with it. I also hope that they realize that tanzanite is a nonrenewable resource and has a finite supply, so if they can, they should try to get their hands on a nice big, gemmy piece if possible! I hope readers fall in love with the jewelry and learn something about some of the top designers in the world.

Lucara Recovers a 472 Carat Diamond at Karowe; the Mine’s 3rd...