Although calcite is a common mineral, its presence in this size makes this specimen interesting. Calcite commonly occurs in ‘rhombohedron’ crystal form (a shape with six rhomb-shaped faces), however, here calcite crystals display, so-called, ‘scalenohedron’ form with sharp crystal edges, and hence the name ‘blade’ calcite is given.
weight: 90,000 carats
origin: USA

This multi-coloured jasper illustrates the artistry of nature….a single gem, that too in this size, possessing variable hues and tones of colours, caused by variations in chemical impurities is a treat for the collectors. Presence of dendrites is an added feature in this specimen.
weight: 67,100 carats
origin: Mexico

Sometimes, nature can create interesting shapes too, and this specimen of agate is one such example. This grey and brown agate form the shape of a shoe in its original matrix …put your imagination in use!! Also visible are small crystals of crystalline quartz within the outer ‘banded’ agate rim.
weight: 63,300 carats
origin: Brazil

Rhodochrosite is known for its pink colour, but the brown colour of this rhodochrosite specimen makes it a rare collectors’ item. This specimen was mined in the year 1960 in Japan, and since then the mining has been stopped in the area, making this
specimen even rarer. ‘Spherulitic’ growth pattern of rhodochrosite further reminisces a ‘flower bouquet’.
weight: 1,40,700 carats
origin: Japan

This variety of fluorite in a pleasant honey colour consisting of smaller intergrown cubic crystals has a camel hump pattern with all the three elevations. While the smaller cubes add to the beauty, such specimens are often reserved for the collectors. It is to be appreciated that how the nature creates a stone in so many different shapes and designs. weight: 90,600
carats origin: China

These specimens are onyx marble – a variety of calcite-aragonite. The term ‘onyx’ is given to these varieties of marble because of their ‘onyx-like’ banding, a well-known variety of chalcedony (quartz). Although these are not commonly used as a gem but are an important material for making artifacts.
origin: Argentina

This heap of intergrown cubic crystals of pleasant green fluorite forms a hill. Considering the size of the heap and smaller crystals, such specimens are not fashioned and are often left for the collectors.
weight: 74,150 carats
origin: Mali

This Jasper with two main colours – lavender and brown forms an exquisite colour combination. Note how the nature has minutely created ‘spherical’ designs on this specimen. Depending on the portion used, the fashioned stones will have different colours and patterns in individual pieces, hence, no two stones will be similar!
weight: 47,220 carats
origin: Madagascar

The craftsmanship of this unique plate of malachite is a result of a ban on exports of rough stones from the mining country. After such ban, the local craftsmen started creating such decorative art pieces and exported around the globe. This ash-tray displays exquisite banding of malachite, along with a carved crocodile at the top and a fish with an open mouth at the bottom.
weight: 45,100 carats
origin: Democratic Republic of Congo (Zaire)

Copper is one of the few metallic elements to occur in native form, although it is commonly found mixed with other materials. It typically occurs as irregular masses, as illustrated here. This specimen is associated with its matrix, but the majority of areas still display its typical metallic ‘copper’ colour.
weight: 39,900 carats
origin: USA

Sugilite is one of the least known gemstones, however, when such specimens having a shape of tortoise are seen, these are a real treat for collectors. Just with a little imagination, one can make out the shell with its face projecting out! Sugilite often occurs with other minerals such as pectolite, as seen here in blue colour.
weight: 26,975 carats
origin: South Africa

This heap of metallic crystals of pyrite is interwoven together by nature itself – no human interference! Because of the metallic yellow colour and resemblance to gold, pyrite is often referred to as ‘fool’s gold’.
weight: 48,500 carats
origin: Spain

These multiple and large pieces of fossilized shells embedded in its matrix along with opal is quite unusual. Such an unusual combination tells a lot not only about the history of their formation but of the region where it is found. This specimen also illustrates how nature preserves the extinct species, assisting in the understanding of Earth’s evolution.
weight: 72,500 carats
origin: India

This chalcedony specimen forms a shape of the helmet. The outer surface is polished but when one looks inside the helmet, there are numerous shining pieces attached to the inner surface, like sparkling stars. These small pieces are amethyst and gives an impression of the polished surface.
weight: 37,650 carats
origin: Brazil

This agate is presented as a bowl with its lid. A single piece of rough with a central cavity has been cut open to get these two parts – one as the bowl, and another as its lid. The central cavity is further filled with smaller crystals of crystalline quartz, lined with iron oxide.
weight: 51,275 carats
origin: Brazil

This Jasper with two shades of brown reminisces a caramel candy! Such shades of brown colour are caused by the presence of iron oxide in two different forms – hematite (darker brown) and goethite (lighter brown). The stones fashioned from such material often shows different colours and patterns in individual pieces.
weight: 53,800 carats
origin: Madagascar 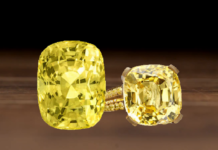