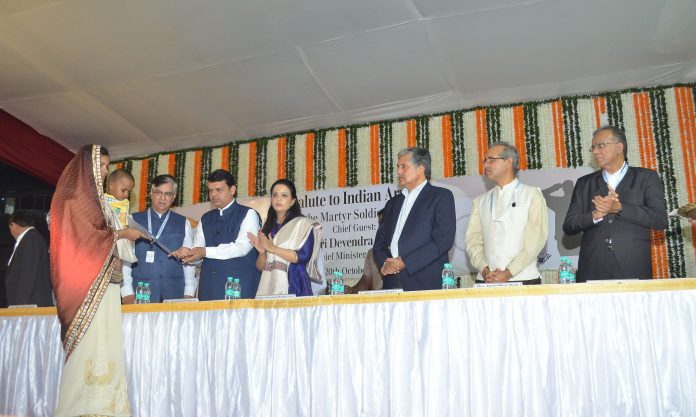 The Chief Minister of Maharashtra, Hon’ble Shri Devendra  Fadnavis was the chief guest at a function held by The Gem & Jewellery National Relief Foundation (GJNRF)   yesterday, October 20 , 2016, to honour and pay tribute to the  martyrs  of  the  recent Uri terror attack.  The event was supported by The Gem & Jewellery Export Promotion Council (GJEPC), the Bharat Diamond Bourse (BDB) and the Mumbai Diamond Merchants’ Association (MDMA).

Fixed deposits worth Rs. 10 lakh  were disbursed by the GJNRF to the family members of  each of the  19 soldiers who had lost their lives in the  attack.

Shri Fadnavis  was accompanied on the occasion by his wife Smt. Amruta Fadnavis, who joined him as he paid tribute to each soldier and condoled with the family members, who had been especially brought to Mumbai for the event.

Anoop Mehta President, BDB, welcomed the guests to the function. He spoke of the steps taken by the BDB to make it a secure environment as it can be perceived as both an “iconic and economic” target.  Prior to attending the function, the CM had inaugurated a state-of-the-art security command and control centre, Mehta said.

Referring to the function organised by the GJNRF he said: “Today’s joint initiative is unique as it represents a collective effort to honour the army’s martyrs. This ‘act of giving’ to India’s armed forces is a step that will open the floodgates of constantly recognising the contribution of our soldiers and  the value of their contribution to our society. However, even apart from this, individual members of industry are  doing much for society.”

Praveenshankar Pandya, Chairman, GJEPC, made an impassioned speech about the contribution of Indi’s soldiers and army, assuring the families of the martyrs that the nation was behind them and would not  forget the sacrifice made by their loved ones.

Addressing the families of the departed soldiers he said: “We cannot bring back your loved ones. But we can do our little bit.”

He added that the surgical strike by India’s army would remain an example and has proved that India and its army were both, strong and vigilant.

Pandya, giving a brief history about the  GJNRF said that the gem and jewellery had  come together to set it up at the time of the Kargil War.  The organisation   set up 1,100 scholarships for the children of soldiers who had lost their lives in the war as well as put up a hostel in Mumbai for students who come here for higher education, amongst various other measures taken at the time. The GJNRF had also helped victims of the various bomb blasts in Mumbai as well as helped rehabilitate victims of the Gujarat earthquake and the Orissa floods.

“Our soldiers work at protecting our borders so that we can sleep peacefully,” said  Shri Fadnavis speaking at the event. “And sometimes they give up their lives.”

Addressing the soldiers of our army he said “You should know that all the country stands behind you. Your family  is not limited. The entire country is your family.”

Shri Fadnavis said that after the surgical strike, India had received a lot of support   internationally and was able to  put its stand forward to all.

The CM praised the social commitment and the efforts   made in this regard. He promised all support to the industry to ensure that they could maintain a most secure environment  in which to conduct its business.

Photo Caption: Chief Minister of Maharashtra Shri Devendra Fadnavis hands over the fixed deposit certificate while  Smt Amruta Fadnavis and other dignitaries on the dais look on.