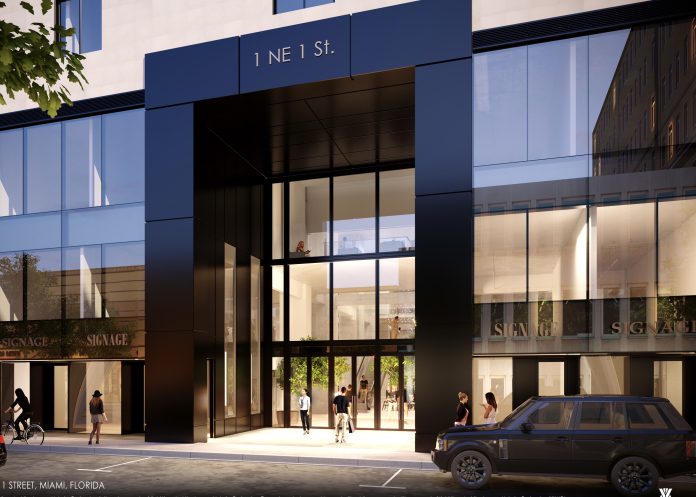 Yair Levy, developer and visionary makes a bet that Downtown Miami is now ready to take advantage of the unprecedented surge in investment in residential properties in close proximity to his new venture, Time Century Jewelry Center at 1 NE 1st Streetwww.timecenturyjewelrycenter.com His instincts for location will bring back the glitz and glamour of the fabled jewelry district that thrived in the  1950’s and 60’s. Levy has begun transforming an iconic building in the heart of downtown Miami into a luxury jewelry center and plans to house the best of the best in retail, manufacturing and jewelry services in the region. His New York-based company, Time Century Holdings, is turning a blighted city block into the jewel of Downtown Miami. The $50 million renovation of the 225,000 square-foot building will be home to some of the top designers from around the world. Time Century Jewelry Center is scheduled for completion in the second quarter of 2022. “This multi-cultural City is the best place to bring a focus on luxury jewelry and watches” says Levy. The growth will be exponential with luxury condos and apartments being developed in close proximity Levy predicts a robust flow of consumers to the building that will also house two upscale eateries. Along with the constant influx of tourists Levy forecasts it could make his 47th Street South a jewelry mecca and a landmark must see for all visitors and residents alike.

More about Time Century Jewelry Center: Plans to open are targeted for summer 2022 offering over 225,000 square feet within their beautifully appointed luxury landmark location. The entire project is designed with the latest state of the art conveniences necessary to service the growing influx of jewelers, watch companies and jewelry trade services now establishing themselves in the heart of downtown Miami. With a large three-story atrium and custom designed escalators, shoppers can see through to the elegant salons throughout the first three levels. Most of the retail spaces will have unobstructed signage viewable from the main floor. Visiting customers will also benefit from Time Century’s very own valet parking service or select from several newly-built public parking garages steps away from the building. Downtown Miami is slated to be one of the fastest growing downtown areas in the nation, re-vitalizing the largest anchor tower located at 1 NE First Street and E. Flagler Street, soon to be one of the most vibrant jewelry districts in the country. Time Century Jewelry Center will house over 270 jewelry stores and jewelry related offices. The district currently generates close to $1 billion in sales annually and is slated for dramatic growth. Time Century Jewelry Center has easy access to Metro Rail, People Mover and the Brightline train, connecting Miami to Fort Lauderdale and West Palm Beach. They are minutes away from the Port of Miami, known worldwide as the “Cruise Capital of the World.” Millions of tourists visit Downtown Miami each year and many more are expected to arrive as soon as the Brightline commuter train opens a station in Orlando, connecting Miami tourists to Orlando’s theme parks. All of this will service and entertain the dramatic increase in residential living areas now being developed surrounding the Time Century Jewelry Center.

The City of Miami has been ranked as the fourth “Most Walkable City” in the U.S. because of its Downtown historic buildings, restaurants and now a modern secure exclusive jewelry and gem tower through the vision of Yair Levy and Time Century Holdings. For more information about Time Century Jewelry Center leasing options please call Isis Pellegrino + 786.534.8550 or visit our website www.TimeCenturyJewelryCenter.com