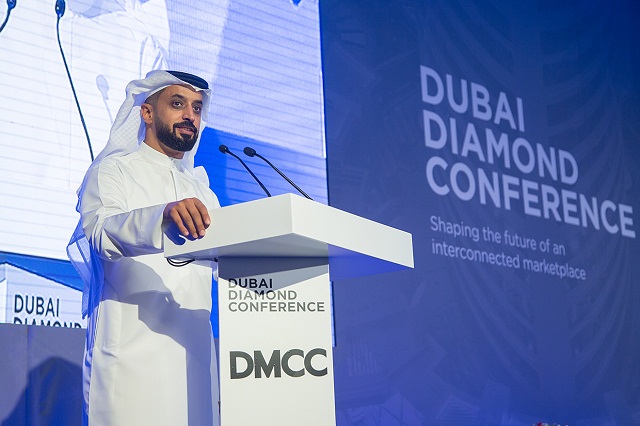 The Dubai Diamond Conference 2017 got off to a strong start with a sparkling line-up of diamond industry stalwarts speaking and sharing insights at various sessions including panel discussions. The theme of this, the third edition of the biennial two-day conference was ‘Shaping the future of an interconnected marketplace’.

The Conference was inaugurated by His Excellency Abdullah Al Saleh, UAE Ministry of Economy, Undersecretary of Foreign Trade and Industry, UAE, and DMCC’s Executive Chairman, Ahmed Bin Sulayem. In their opening remarks, they welcomed the top-level speakers and panellists from every sector of the diamond pipeline from across the world.

“It is really excellent to see that so many world-class experts have travelled from all over the world to attend the 3rd Dubai Diamond Conference. Dubai believes in the diamond industry’s potential to grow and we are committed to doing everything we can to support the industry,” said H.E. Abdullah Al Saleh.

Pointing to the crucial role played by the conference Bin Sulayem said, “Diamonds have long played an illustrious role in Dubai’s heritage as a gateway for global trade. And, in just 15 short years, Dubai has become the third biggest diamond trading centre in the world. It didn’t happen by accident. It happened because we designed an environment that is safe, business-friendly, and that conveniently links producing and consuming markets.”

Bin Sulayem noted that recent research had found that 37% of millennials claim to distrust big business and brands. “It’s a different world,” he said. “And it goes beyond just advertising and marketing. What do we as an industry have to change to better appeal to this demographic? That’s why I find that one of the today’s panels, ‘How diamonds fit in the new era of Millennials’, will be especially important.”

The keynote speech by Sir Mark Moody-Stuart, Chairman, Global Compact Foundation,  focussed on the United Nations Global Compact initiative and outlined how the diamond industry can implement its Sustainable Development Goals to build “a more just, more equitable and more sustainable future for all”.

The opening day of the Conference saw panel discussions on two important industry issues:  ‘Uniting the industry to accelerate initiatives driving the sustainable development agenda forward’, and ‘How diamonds fit in the new era of millennials’.

Blom presented the diamond industry’s perspective on responsible mining, manufacturing and sourcing of goods. “Sustainability is critical for the protection of our planet, and from a consumer point of view, it has become the ‘new normal’,” he said. “Consumers – especially the younger generation – are demanding this and we must show that it is a vital part of our agenda.”

Next, Diamond Producers Association (DPA) CEO Jean-Marc Lieberherr presented an update on the association’s work in promoting diamond jewellery sales, particularly among younger buyers. This was followed by the panel debate on ‘How diamonds fit in the new era of millennials’. Joining Lieberherr on the panel were Amit Dhamani, CEO and Managing Director, Dhamani Jewels Rajiv Mehta, Director, Dimexon International and Kolia Neveux, Managing Director – the Middle East & Africa, Bulgari. They discussed the vital importance of attracting millennials, a sector of the market which in the United States alone is estimated to have a spending power of US$ 65 billion. Lieberherr reported that the DPA’s research showed that millennials were looking for authenticity in their lives and that diamonds were seen by them as representing something real.

ALROSA sells rough and polished diamonds worth USD 390 million in...