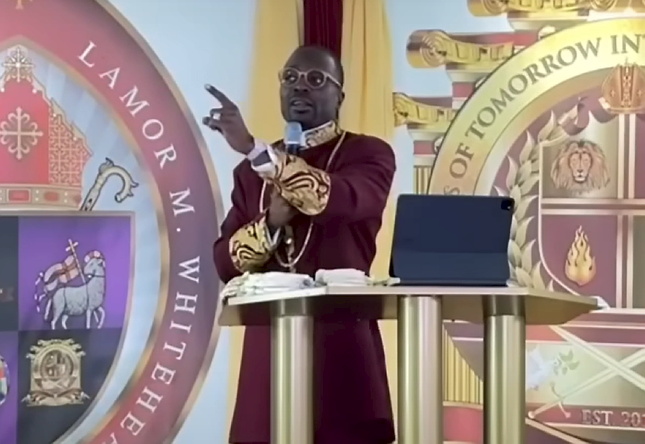 Two men have been arrested after a flamboyant pastor and his wife were robbed at gunpoint of $1m of jewelry. A third suspect remains at large.

The alleged incident happened as Lamor Miller-Whitehead was giving a live-streamed sermon at the Leaders of Tomorrow church, in Brooklyn, New York, in June.

The U.S. Attorney’s Office for the Eastern District of New York says Juwan Anderson and Say-Quan Pollack have been arrested over the incident.

Miller-Whitehead, who goes by the title bishop, said a raider brandishing a gun took off his bishop’s ring and chain, his wedding ring, and chains he was wearing underneath his clerical robe.

The service was livestreamed to congregants, but the raid is no longer available on the church’s website.

The Attorney’s Office said in a press release: “As alleged in the indictment and court filings, Anderson, Pollack and a co-conspiratorâ€”masked and clad all in blackâ€”entered the church brandishing firearms, while parishioners attended church services in person and via a live-stream.

“The lead pastor dove to the floor, while his wife shielded their infant daughter who was sitting on her lap. Pollack stood guard at the doorway, pointing a firearm in the direction of the parishioners and the pulpit.”