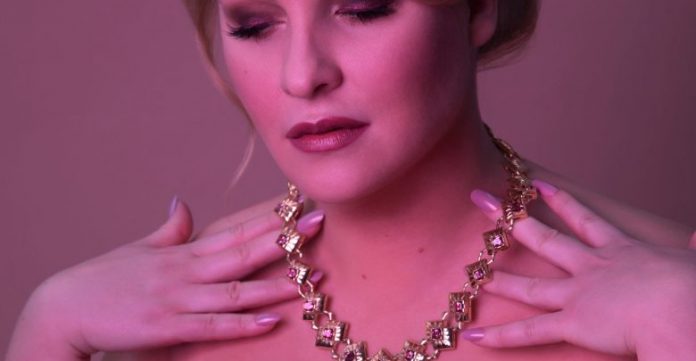 Created in 18-carat yellow gold and foxglove tourmaline, ‘Her Regard’ is a fine art jewel inspired by Barker’s favourite novel, “The Stress Of Her Regard,” by internationally acclaimed fantasy writer Tim Powers, the imagination behind Hollywood epic the Pirates of the Caribbean.

His novel explores the life stories of the British romantic poets, but in a dark twist of story-telling, Powers allows us in on their ‘secret history’.

Victoria was honoured to show the finished necklace to Powers, who upon seeing the piece said: “Thanks so much for making a tangible and gorgeous object from the book!”

Fifteen tourmalines reside in a golden lozenge with both gemstones and chain links deliberately tilted at 45-degree angles designed to evoke the idea of ‘ancient pyramidal sculptures’.

All of Victoria’s work begins not as a sketch on paper, but by draping gold and gems on a mannequin; in this way, her designs flow effortlessly around the female form. The necklace also features a clasp that allows the wearer to adjust the style from choker to extra long.

News & Trends
An independent jeweller plans to host a 12-hour Livestream on Saturday, May 30. Continuing to utilise the power of digital connections during the lockdown, Andrew...

Retail
The prime minister has given jewellery retailers an official date for re-opening. Speaking at the daily press briefing on Bank Holiday Monday (May 25), Boris...

TOP TIPS: How to market a jewellery brand to today’s hybrid...