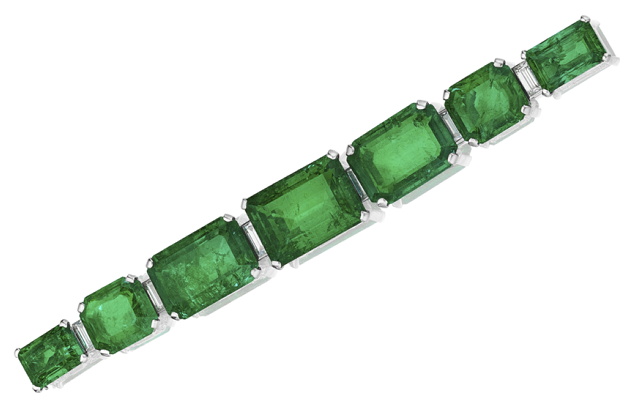 A rare Cartier art deco emerald and diamond bracelet is expected to fetch up to $1.25m when it is auctioned tomorrow at Bonhams New York.

It was made in 1926 and belonged to the American heiress Helene Irwin Crocker Fagan (1887-1966), whose father William G. Irwin made his fortune from the sugar plantations of Hawaii.

The bracelet (pictured) was designed as a graduated row of seven rectangular and octagonal step-cut emeralds, weighing approximately 101.00 carats; spaced by baguette-cut diamonds, the sides set with baguette and old European-cut diamonds; mounted in platinum. It carries an estimate of $750,000 to $1.25m.

The sale includes more than a dozen pieces from actress Bette Midler, 76, among them a diamond and yellow sapphire feather from Tiffany & Co, a pair of gold bubble bracelets from Demner, earclips from Buccellati and a Cartier La Dona gold watch.

There are also pieces previously owned by Lady Sylvia Ashley (1904-1977), the English model, actress, and socialite who counted the actor Clark Gable among her five husbands.

De Beers to Close Victor Mine in Canada by Q1 2019