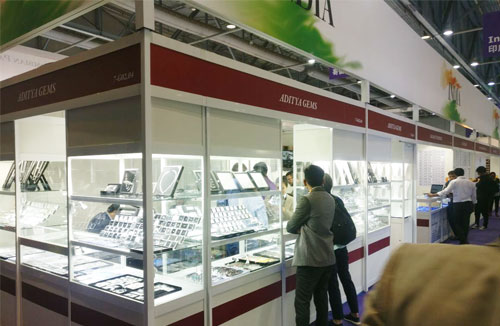 Two strong India Pavilions under the aegis of The Gem & Jewellery Export Promotion Council will showcase loose diamonds, gemstones as well as jewellery manufactured in India at the twin Hong Kong shows, the first of which opened in that city today.

The city state is an important centre of the gem and jewellery trade. Opening the show this morning, HK’s Secretary for Commerce and Economic Development, Mr Edward Yau, told participants, “While Hong Kong is already an important market in its own right, I am sure you are also seeing Hong Kong as your gateway to reach a much bigger market in the region.”

Benjamin Chau, Acting Executive Director of the HKTDC, which organises the show said, “As global economic conditions improved in 2017, sales of fine jewellery rebounded with the rise in purchasing power. Last year, Hong Kong’s exports of precious jewellery grew 3.6 per cent. At the same time, Hong Kong’s total exports of pearls, precious and semi-precious stones and raw materials increased by nearly 14 per cent in value.”

An important destination for Indian gem and jewellery exports, Hong Kong last year imported a staggering US$ 10.93 billion worth of gem and jewellery products from India, of which cut and polished diamonds accounted for almost US$ 8 billion; gold jewellery for US$ 782.13 million and coloured gemstones for US$ 160.23 million.

GJEPC Chairman Pramod Agarwal said, “Hong Kong has been second largest export market for the Indian gem & jewellery industry. The two shows have been an important platform for the Indian industry. The shows not only help us to expand our reach in the Hong Kong market but also gives access to the key markets of Asia. Every year we make sure that our best manufacturers get this opportunity at India Pavilion to showcase our capabilities in terms of best cuts and jewellery design.”

Diamonds Do Good® To Support Families of Fallen Healthcare Workers Due...